Skam is a TV serie produced in Norway from 2015.

As the name show suggests [Skam=shame] tells the story about a group of teens dealing with the typical problem from adolescence and their first experiences.

This serie, which now is on season three, is reaching a lot of success around the world for its new way of telling stories and being completely sincere about teens’ problems.

Another thing that makes this series so interesting is that for the first time we have the chance of getting to know another culture which is not American or British.

We get to know Norwegian culture and how it is effected by globalisation. In fact one of the main characters is a Muslim girl whose is not stereotyped at all (it happened only once before in Skins’ serie).

So one big skam’s goal is to understand cultures and religion that seems so different from ours and put a spot on political and social problem such as homophobia. Homophobia is barely saw in the show, in fact when one of the group confesses that he is gay everyone do not take it as a big revelation and treat him as an equal even when they talk about sex. This is unusual because writers usually described the gay guy, especially when he is a teenager, stereotyped and emarginated.

One thing that I really liked about the show was the costume’s job. You can is it clearly during season 3 how the couple at first have their own style but when the relationship grows stronger both of them get dressed very alike to, in some kind of way, highlights their harmony and love. 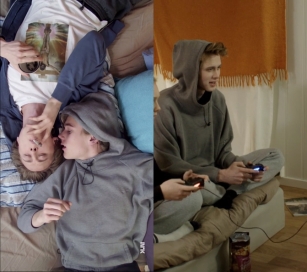 The third season is the one who got the biggest success not only for the main character of the season but for dealing with more serious problems such as mental diseases, for example bipolar disorder.

So the second big goal for the show to reach is to make people believe that the person affected with mental disease is still a person and feel emotions even if he is ill.

Someone describes this show as the most ‘modern’ show on air thanked the used of the socials. In fact, producers have actually created characters’ profiles on social and they are always updated. This marketing strategy has been adopted as well in the the vampire diaries serie on the last episodes.

In conclusion, I hope you find this review interesting and you will give a chance to this show.